Some of you may remember my mention of how our adopted rooster wasn’t having any luck with the chickens so he had turned his eye to the ducks.

In this video you can see the ducks wanting to walk away from me but also hesitant to keep going because Gorgeous George is down on the other end.

It had gotten to the point that the ducks wouldn’t come anywhere near the coop if he was around. You’d see their white heads, alert and apprehensively looking around, quietly stalking up the hillside. Then George would appear and the whole flock would run like mad, quacking loudly down to the safety of the pond.

One poor duck’s legs got injured in this great run away and so thereafter she could never quite get away fast enough and she always bore the brunt of George’s affections. She was looking haggard.

We decided, in the interest of the flock, it was time for a chicken dinner so Josh and Oliver harvested poor Georgie last weekend. It was a great lesson in anatomy and where our food comes from for him! He was so curious about the process. 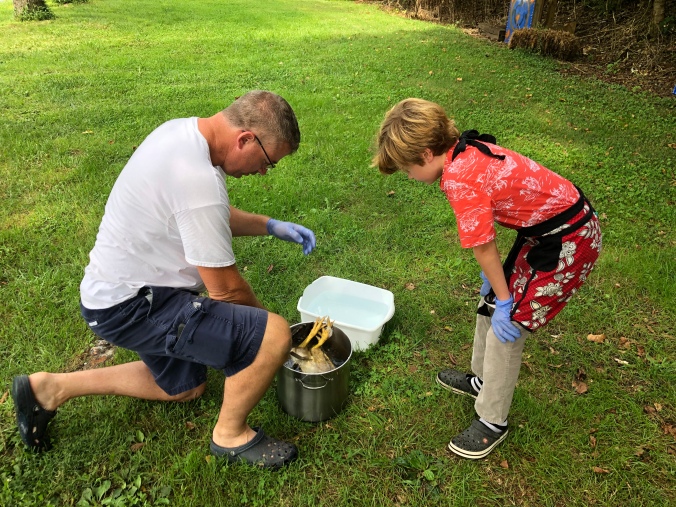 I cooked him in my instapot then pulled the meat off and cooked the carcass for broth. Part of the meat went into a chicken pot pie and the second half will probably go into chili. So between the meat and the broth that’s three meals from one bird. We certainly want to honor the death of one of our animals by not letting any of it go to waste! We are grateful for George’s nourishing meat and the ducks are happy to have peace in the bird yard again.

Now I’ve turned my attentions to retraining the ducks to come into the coop to sleep at night.

They used to sleep in the coop and then got scared and have since been sleeping on the pond at night. When they lay their eggs around the water it’s difficult to find them, and we end up losing a lot to critters.

So about a week ago I locked the ducks out all day. By dusk they were pretty hungry and I was able to shoosh them all in to eat and sleep inside. The next morning I let them out and closed the door behind them. I just left a high door open for the chickens to get in to lay eggs. Again the ducks came quacking up the hill around 8:30 ready to go in.

And so I’ve been repeating this routine every day and each night up the bunch comes. Tonight they stood at the door quacking around 8:10 (It’s amazing how quickly we are losing light). 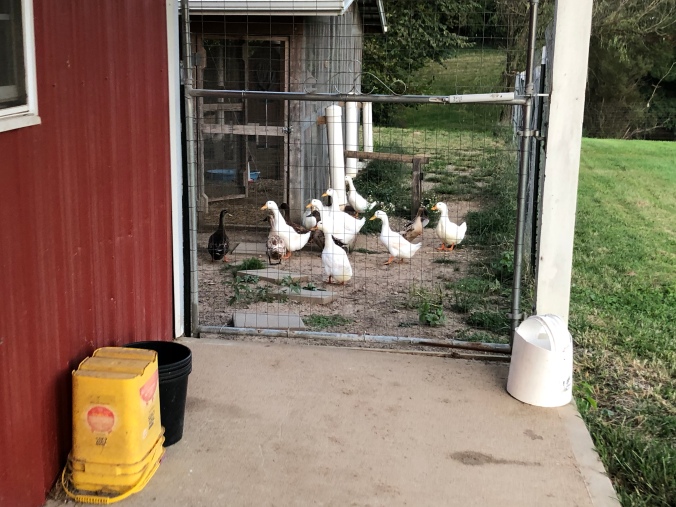