When I talk about harvesting birds some people cringe and change the subject. I understand. It’s not a picture many like to have in their minds – it’s not one I want to hold in mine! But harvest is a part of life when you’re raising a lot of birds and trying to look out for the best interest of the flock as a whole.

We got 50 ducklings this fall. Ducks are usually sold “straight run” which means you buy them unsexed. You cross your fingers and hope they turn out at least 50/50 male and female. We ended up with 23 males. As time went on, they began to mature and we started to see some mating happening on the pond.

It didn’t take too long for it to become clear that we had way too many males. One male would chase a female down and mount her. Now even with one male and one female, ducks mating on water looks like the male is trying to drown the female. Then, because we had so many males, two or three more males would jump on the train, pushing that poor female further down under the water.

So the girls learned to avoid the pond. More and more we started seeing the females hiding out in the trees and the boys cruising the water. Then the males started chasing the females around on land and piling on them on dry land. Many of the females started to look haggard. They were limping around and had lost all kinds of feathers on their necks.

We decided we had to take action after I found one of the smaller females with a broken neck one morning. One night when all the birds came into the coop we separated out the males into one run, leaving just the smallest and least aggressive Rouen male.

Yesterday we started a process we were not looking forward to, but which had to be done for the sake of the flock.

Harvesting birds begins with the cutting of the neck. It’s a quick and hopefully painless end. Like many farmers, I want the best for my animals. I certainly don’t want them to suffer. Next is plucking – the longest and most tedious step with ducks because of all their layers of feathers.

We borrowed a turkey fryer from a coworker and set it to just under 150 degrees. This worked well for dunking because it stayed at an even temperature and I didn’t have to run into the kitchen to heat more water. After the hot water to release the feathers, they go into cold water to stop the cooking. 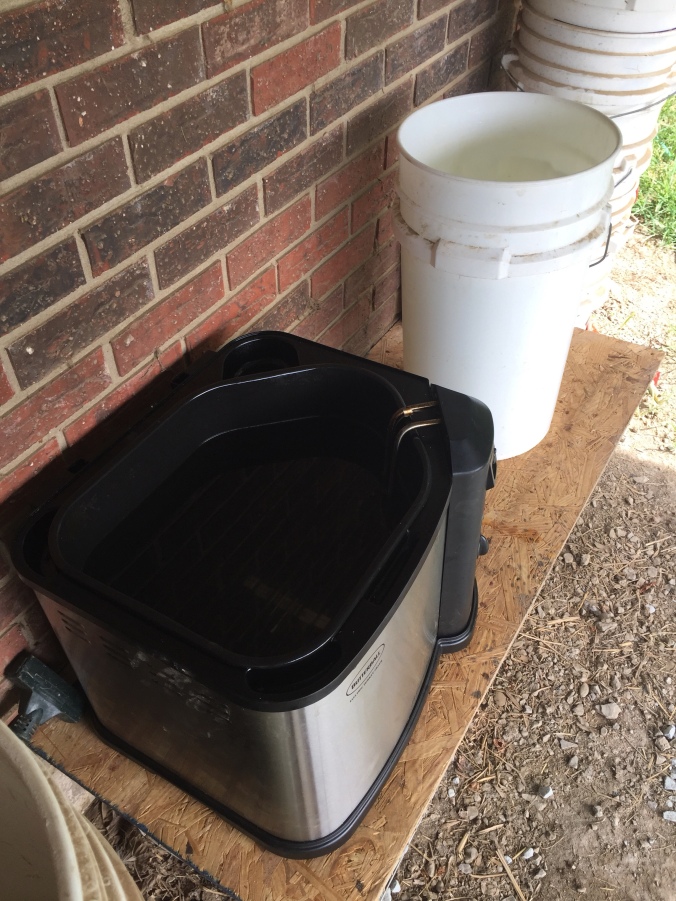 Then they’re ready to pluck. We hung ours from the rafters of the lean to for this part. My old friend Kate came to help us. She and I did mostly plucking. It’s seriously tedious work but we got in a rhythm after a while… 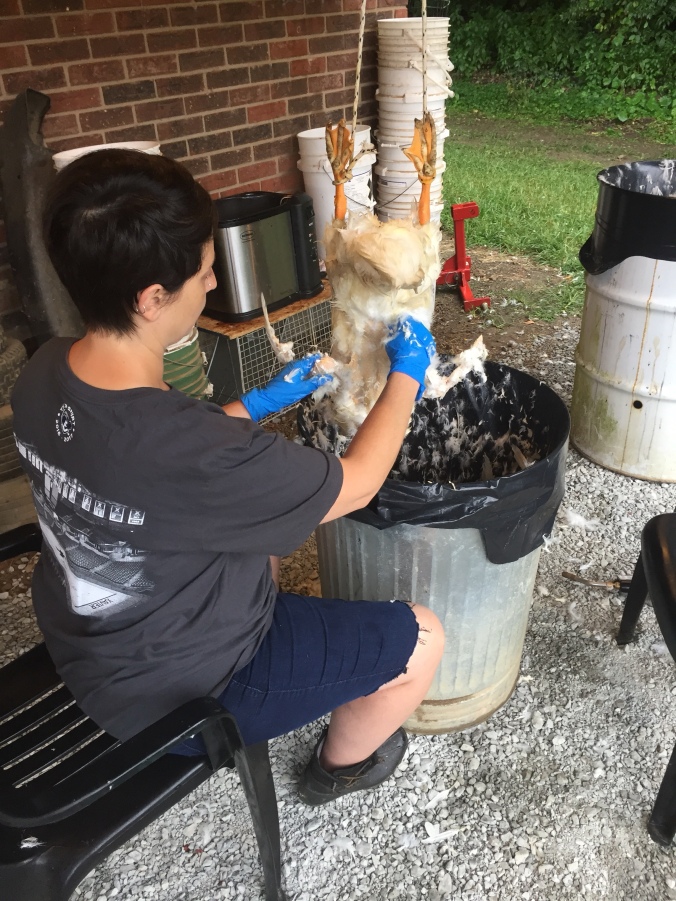 Kate’s dad told us about a method he and his brothers used as boys when harvesting ducks and geese. They would hold the mostly plucked bird over the flame of the gas burner to burn off the last of the down. We tried using a plumber’s torch and it worked pretty well.

Once fully plucked, the birds went back to my husband for evisceration. He got his process down so well that he could have a bird ready in just a couple minutes.

Because we had so many birds to process, we filled a sanitized barrel with cold water and ice to keep them cool until we were ready to bag them.

At the end of the day, we cleaned and vacuum sealed the ducks. They’ll rest in the fridge for 12 hours then go into the freezer, to help develop their tenderness.

Most of the birds turned out to be 3.5-5.75 pounds dressed. The largest ones are like small turkeys and the smallest like Cornish hens (2.25 pounds). We will have them for sale if you live in the area, $3/pound.

It’s a dirty process but I remind myself that these birds enjoyed sunshine, bugs, swimming on the pond. We gave them a good life and a quick painless end, and their food will not go to waste.

Already there is peace again on the pond. The girls are back to swimming and their necks and legs are beginning to heal. We had a drop off last weekend from a neighbor of a small Rouen female. The girls have rallied around her and are teaching her how to come into the coop at night. The flock is rebalancing.

And check out this sky.

After three weeks of drought we finally got big storms and big rain today while we worked. I glanced out back to see these clouds. I panicked for a moment because I thought they looked like swirly tornado-y type clouds but they just brought rain and thunder. It made us pluck a bit faster, worried we might have to make a run for it! Mother nature’s motivation 🙂