My little ducklings are getting the hang of their daily routine.  I am utilizing the fact that they are afraid of the chicken door to my benefit in teaching them.

Initially I thought it would be better to lock them in the coop until they figured it out on their own how to use the automatic chicken door.  I thought they’d watch the chickens using it and eventually just get it.  That didn’t seem the work though.  Day after day they just hung out in the coop all day.  Finally, I decided to take another path.

In the morning I opened the human sized door in the run where most of the ducklings hang out – the one they’ve been in since they moved outside.  I shooed them out through that door and walked them down to the pond.  They were terrified until they fell into the water and then they were delighted.  I came up and closed the door so they couldn’t come back in until evening.

Evening came and they got hungry so back up the hill they came.  I opened the human door again and let them back in.  Because they were scared of the chicken door, they wouldn’t come back out even though they could, thus ensuring they’d stay locked up safe for the night.

Ok, so I did this for a few days until they started to get it that going to the pond was really fun.  In the morning, I arrive and open the human door and they come streaming out.  No more shooing required.  I close the door and they are, for all practical purposes, locked out until evening.

They spend most of their day either out on the water or laying or foraging in the grass nearby. 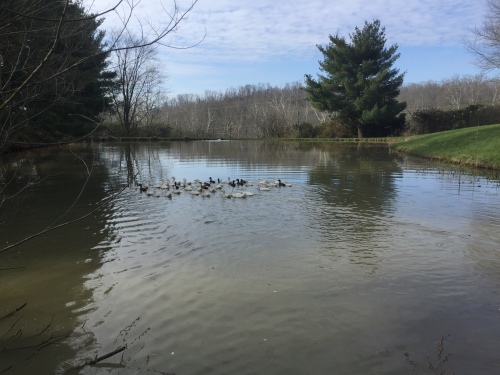 At dusk, they come up the hill all together, a hungry, quacking mass of white and brown.

The next part of my transition has been getting them to go into the coop through the automatic chicken door.  I set up some old gates we had laying around to create kind of a shoot.  When they start coming up the hill, I walk wide and get behind them.  I slowly shoo them into the shoot and eventually they start going up the ramp into the coop.  The first day there was a lot of hesitation and uncertainty but day by day it’s gotten better.  Now most of them will even go in on their own without any encouragement from me.

There’s just this one bird who can’t seem to figure out the ramp on her own.  She will just lay there next to it, even after dark when the door automatically closes.  I’m not sure what we will do with her but I’m hoping she’s just a little delayed and will catch on eventually. 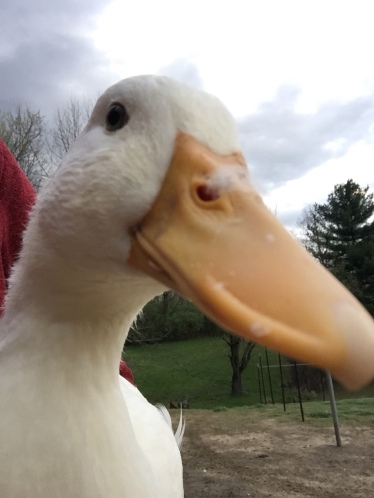 One night I was so proud of my babes because we had gone out to dinner and gotten back later than expected.  It was already dark and the automatic door had closed.  When I went out to check on everyone, I found all the ducks (except the special one I mentioned) had made it inside completely on their own.  They’ve got it! I thought.  It was a proud duck mamma moment.

So it seems they are getting the hang of this daily routine – out in the morning then back at dusk for food and safe sleeping.  Eventually I hope to teach them to go in and out the small door.  Baby steps – we’ll get there.  For now I’m so grateful that they are getting the benefit of free ranging all day, swimming and foraging for bugs, and minding the setting of the sun so they’re safe inside by dark.  These are the routines we build our lives around on the farm.