We got a big beautiful watermelon from a friend this week so I cut up a bunch of it for an appetizer at family dinner.  After dinner there was still a large portion of watermelon left so I made Watermelon Salad with Fresh Mint and Feta for myself as a snack.

Here’s how to make it:

Cut the watermelon into small chunks.  Toss in as much feta as you’d like.  Cut a couple mint leaves into thin strips and mix them in.  Make a dressing by mixing a tablespoon of olive oil and a tablespoon of lime juice plus a little salt and pepper.  Pour dressing over the salad and enjoy.

I was carrying the remaining watermelon outside for the birds when my husband came up.  He said he was thirsty and would like some watermelon.  Before I knew it he just reached his hand down in there and grabbed a huge chunk.  He ate it with abandon, letting the juice run down his shirt.  Now that’s got to be one of the joys of summer right there!  I laughed out loud watching him eat and the birds gathering around to grab the chunks that fell. 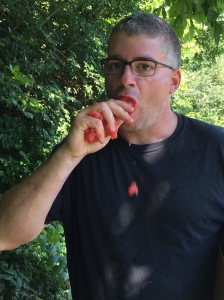 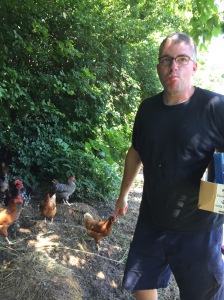 When he was done the girls got the rest.  That’s it: watermelon for the whole family!